Blepharoplasty is an intervention that makes it possible to impart sparkle to the eyes by correcting an excess of skin or skin and fat. It can be performed at any age both on women and on men. The form and size of the eyes remain unchanged. The surgery can be applied to the upper and/or lower eyelids.

Bags under the eyes

They are situated at the level of the lower eyelids and may be linked to water retention, hypertrophy of periocular muscles, slackening of the skin, or the development of fatty hernias.

It can be located both at the level of the upper and lower eyelids.

This intervention can be combined with lifting.

Blepharoplasty of the upper eyelids

It allows the excision of the upper palpebral cutaneous excess as well as the jutting pockets of fat.

The incision is concealed within the folds of the upper eyelid. The scars are red at the beginning and fade progressively. 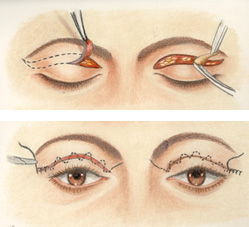 Blepharoplasty of the lower eyelids

It corrects the cutaneous excess and adipose bags but does not remove the fine wrinkles of the lower eyelid; these require supplementary treatment if the patient desires to undergo it.

The circles under the eyes fade; the pigmentation of the skin remains unchanged. You can apply subsequently a local treatment. Your surgeon will give you ample information on this subject. The two interventions can be combined.

The incision is made on the internal part of the lower eyelid and allows the removal of the adipose bags.

This technique can be applied if the skin is of good quality and does not droop. 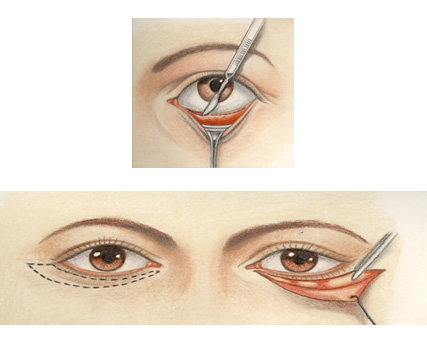 If there is cutaneous excess, the incision is situated at the base of the eyelashes.

This intervention is not painful, but there is much discomfort during the first 48 postoperative hours.

Daily activity should remain moderate during the initial period. Any violent effort could provoke a hematoma. Ice can be applied three to four times a day in order to diminish to a minimum eyelid edema.

At night, you should sleep in a semi-reclined position.

Daily care of the eyes will be carried out with a physiological solution 3 to 4 times a day. An eye ointment will be prescribed by your surgeon.

At the beginning, the scars are red. This redness fades away after six months. It is also advisable to massage the scar as often as possible. Exposure to the sun is counseled against during the initial two months. The eyelids regain sensation after two months. A small correction is always possible starting with the sixth postoperative month. 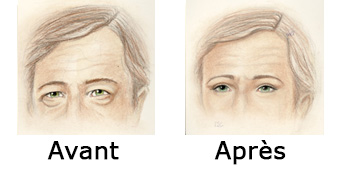 Patients are generally satisfied, and the esthetic improvement persists for a very long time.